Periodic Paralysis is identified as a very rare disease, condition or disorder depending on the source of the information being consulted. The term  “Periodic Paralysis” is specifically used to describe changes in particular genes and involves various degrees of muscle paralysis which are often triggered by chemicals and dietary substances.

In 2009, Susan had her first full body episode of muscle paralysis (Periodic Paralysis) which was triggered by chemical and dietary substances. It took us many years to isolate the primary cause of her muscle paralysis which was genetic mutations in certain genes. I hope that no one else in the world has to go through the painful and expensive processes we have gone through just to get to the core of what was causing her particular muscle paralysis and what could be done to safely address the symptoms. There is no known cure at this time but there are things that can be done to manage the symptoms through identification and elimination of the triggers.

Here is some more information that I hope is helpful in the management of this condition.

The process leading to the identification of “Periodic Paralysis” as the source of muscle paralysis is known as “Exclusionary Diagnosis.”

“A diagnosis of exclusion or by exclusion (per exclusionem) is a diagnosis of a medical condition reached by a process of elimination, which may be necessary if presence cannot be established with complete confidence from history, examination or testing. Such elimination of other reasonable possibilities is a major component in performing a differential diagnosis” “Wikipedia

“Paralysis is when you can’t move certain parts of your body after something goes wrong with their connection to your brain. It comes in many different forms and can be temporary or permanent or even come and go.

Someone who is paralyzed because of a birth defect or sudden injury often can’t feel or move anything at all in their affected body parts. Someone paralyzed by a medical condition, like multiple sclerosis (MS), might feel tingling or muscle weakness.

Paralysis can cause problems with blood flow, breathing, how well your organs work, speaking or swallowing, sexual responses, or controlling the urge to go to the bathroom, depending on where you’re paralyzed and how bad it is.

Complete paralysis is when you can’t move or control your paralyzed muscles at all. You also may not be able to feel anything in those muscles.

Partial or incomplete paralysis is when you still have some feeling in, and possibly control over, your paralyzed muscles. This is sometimes called paresis.

Generalized paralysis is more widespread in your body and is grouped by how much of your body is affected. The type usually depends on where your brain or spinal cord is injured.

Paralysis can be stiff, or spastic, when your muscles are tight and jerky. Most people with cerebral palsy have spastic paralysis.

It can also be floppy, or flaccid, when your muscles sag and eventually shrink.

Paralysis is most often caused by strokes, usually from a blocked artery in your neck or brain. It also can be caused by damage to your brain or spinal cord, like what can happen in a car accident or sports injury.

Some kinds of paralysis are caused by certain conditions or diseases linked to specific genes:

Demyelinating diseases. These happen when the protective coating around your nerve cells, called the myelin sheath, is damaged over time. That makes it harder for your neurons to send signals throughout your body. It weakens your muscles and eventually causes paralysis. There are several demyelinating diseases, but the most common is multiple sclerosis.

Periodic paralysis. This is caused by changes in certain genes. It involves random attacks of paralysis, often triggered by something in the person’s diet.

Sleep paralysis. This happens while you’re waking up or falling asleep. Sometimes people who have sleep paralysis will also see things that aren’t there (hallucinate).

Bell’s palsy. This makes half of your face appear to droop. Doctors think it’s caused by certain viruses.

Todd’s paralysis. This often happens for a brief period after a person with epilepsy has had a seizure, usually just on one side of their body.

Tick paralysis and Lyme disease. Some ticks have neurotoxins in their spit glands that can cause paralysis, starting in your feet and legs and moving upward. Once the tick is removed, the paralysis goes away, but if it’s not treated, it can spread to your face and be very serious. Ticks sometimes also carry Lyme disease, a bacterial infection that can cause several different symptoms, including facial paralysis and numbness in your arms and legs.

Muscular dystrophy (MD). Your muscles need certain proteins to help them stay healthy and protect them from damage. MD is when changes in genes in these proteins make your muscles weak and cause them to break down over time.

HTLV-1 associated myelopathy. Also called tropical spastic paraparesis (TSP), this type of spastic paralysis comes on gradually after an infection with human T-cell leukemia virus type 1. It causes symptoms that are similar to MS, but it happens in less than 3% of people infected with the virus.”

PPNI is not affiliated with any other groups or organizations.

PPNI does not promote or discuss experimental pharmacuetical drug treatments of any kind. 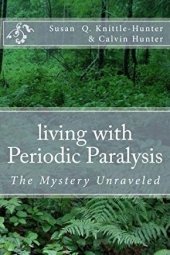 Tweets by DrKristieLeong
We use cookies to ensure that we give you the best experience on our website. If you continue to use this site we will assume that you are happy with it.Ok